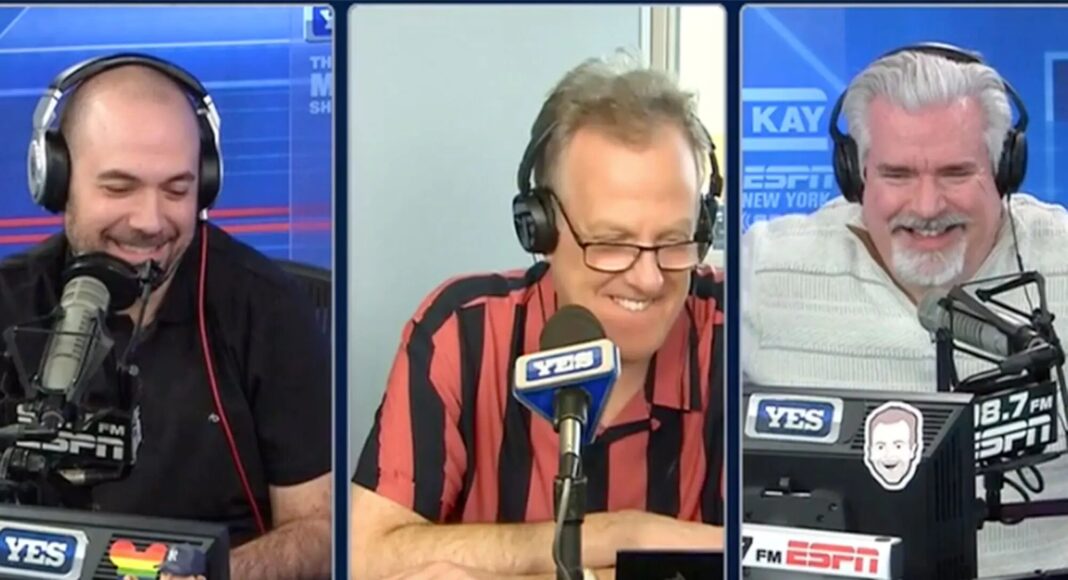 The Michael Kay Show celebrated 20 years back in November, but they may not be celebrating another anniversary in the future.

At the end of September, the longtime Yankee play-by-play announcer’s contract with ESPN New York will be up, and he has supposedly told ESPN officials he does not intend to sign another contract.

Kay will turn 62 next month, and with two children at home, it is understandable he is considering retirement from radio. He has not made a direct statement about the rumors, but did intimate on his 98.7 FM and YES-simulcast show that listeners will know when a decision is made one way or the other.

Should Kay retire, will Don La Greca, Kay’s co-host since the show’s introduction back in 2002, be up for the lead position, with fellow co-host since 2016 Peter Rosenberg presumably bumped up to the 2-slot? It’s a tandem that’s proven to work with audiences and ratings alike, as they’ve successfully done shows without Kay before.

Kay has not given any inkling that he plans to leave his position as the television voice of the Yankees, or as co-host of ESPN 2’s alternative-to-Sunday Night Baseball, Kay-Rod broadcast, anytime soon.

The Michael Kay Show has been on the rise since its inception in 2002. They were always second fiddle to Mike and the Mad Dog— until they weren’t. They finally saw the culmination of their hard work in 2019 when they beat sports talk pioneer Mike Francesca in the ratings book.

Now, they have a new rival. WFAN’s Craig Carton and Evan Roberts are dominating the ratings board. dominate ratings. According to Nielsen Audio, Carton and Roberts now rank 2nd in the male 25-54 demographic. Meanwhile, The Michael Kay Show has dropped to 14th in the 3-6:30 p.m. slot.

The battle here epitomizes the battle between ESPN and WFAN, which The Michael Kay Show allowed ESPN to enter when they rivaled Mike and the Mad Dog. Now, as a collective network effort, ESPN has expanded the hours of Rick Dipetro and Dave Rothenberg’s show from 6-10 a.m. to try and compete with WFAN’s Boomer and Gio.

Boomer Esiason and Gregg Gianotti have a decisive edge over DiPietro and Rothenberg, but there is at least more of an option for listeners to choose between ESPN and WFAN.

Retaining Kay would certainly give ESPN the opportunity to continue to battle with WFAN for supremacy, but if he were to leave and they wanted to replace him with another personality, who would it be?

Signs point to a few names. Possibly Chris Carlin, a well-known New York radio presence that has appeared on The Michael Kay Show quite often, would be a strong choice.

There could be an even bigger name that would make a major splash, however. That being the former WFAN host, Christopher “Mad Dog” Russo. He currently resides on Sirius XM with his own channel, hosts High Heat on MLB Network, and has even made guest appearances on ESPN’s First Take with Stephen A. Smith.

There’s a long way to go still. Hopefully, a decision will be made soon to shed some light on the situation. Regardless, Kay won’t be saying “see ya” for good— however, you can always tune in to YES to take in the vocal staple of the Yankees for the last 30 years.