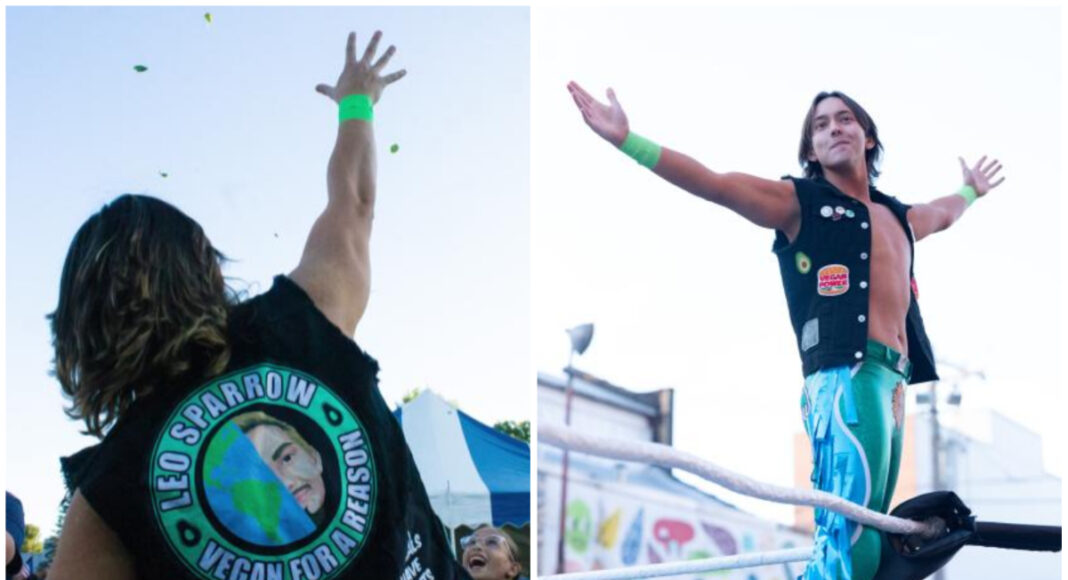 It has been one hell of an ascension for newcomer-to-the-wrestling-world, Smithtown’s own Leo Sparrow, a.k.a. The Son Of The Sun, a.k.a. no steak all sizzle, a.k.a. the King of Kale.

His rise through the professional wrestling world includes his first match against Phil Cardigan to later matches against premier wrestling talent, making his debut on WWE Monday Night Raw.

All the while, he’s a vegan – an unlikely lifestyle choice in the sport, but one that’s given him a memorable reputation.

The choice – a personal choice he made two years ago – lends to his occasional pelting of the opponent with a leafy or bitter green.

This aspect of his persona has come up on the Bob Culture Podcast at 80’s Wrestling Con, where Leo Sparrow made his efforts to convert GKM to veganism apparent.

Sparrow was also interviewed on Rasslin’, a premiere wrestling podcast produced by Barstool Sports. The interview started off shaky, with the leather chair being an early point of contention. Brandon Walker, the interviewer, eventually acquiesced to the cruelty-free demand – albeit creating a comical height difference due to the chair provided. After Walker professed his love of cheeseburgers, he promptly received a handful of spinach to the face from the “spinach bag,” much to his surprise.

Outside of his spirited defense of veganism, Sparrow and Walker discussed the former’s appearance in RAW and Rampage in the same week, earning him a comparison to a “modern-day Rick Rude.”

Lamentably, the greater Smithtown community and wrestling fans from across the nation will have to patiently wait until the January issue of Professional Wrestling Illustrated (PWI).

Much of his influence that led him to join the sport comes from his childhood, but he’s quickly finding new sources for inspiration.

“When I was younger, it was going to shows and meet and greets,” said Sparrow. “When I started wrestling, traveling, and meeting different people, it made so many new memories.”

Now, his goal is to be a contracted professional wrestler.

“I want to be able to say that I have a job that I truly love going to and grew up loving,” he added. “I’m confident in myself and know that it’s my future, so until then, I’ll be working harder.”

Whatever the future holds for Sparrow’s cruelty-free and awareness-raising career, it’ll certainly be worth watching for local sports fans – we might just have the next world champion out of Long Island.

And not if, but when we do, you best believe The Messenger Sports will be on the call.