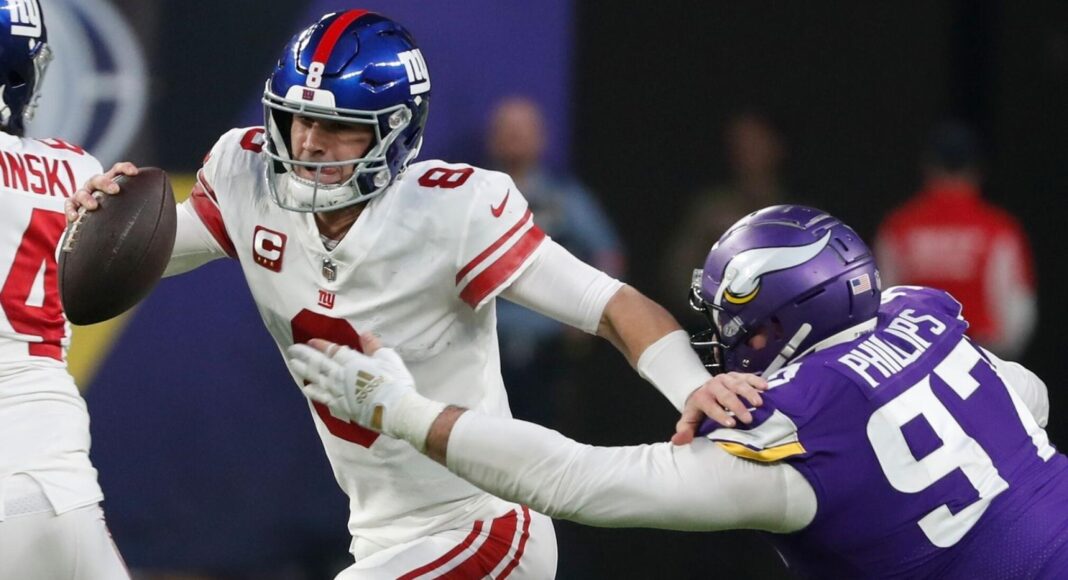 Dan the Man: Led by Jones’ Historic Performance, Giants to face Eagles in Divisional Round

Daniel Jones has had a turnaround season as the New York Giants quarterback. On Sunday, he furthered his success on the season when he became the first quarterback in playoff history to throw for 300 yards, 2 touchdowns and run for 70 yards.

The Giants needed every yard of that performance as they avenged their loss from a month ago in Minnesota and knocked the Vikings out of the playoffs with a 31-24 victory.

Numerically, the season hasn’t been anything eye-popping for the 4th year QB out of Duke, but where the major change has come is in his turnovers.

Jones was notorious for throwing too many interceptions and fumbling too often. This season, he threw just 5 interceptions, 3rd best in the NFL, and fumbled twice, losing only one.

Much credit is owed to first-year head coach Brian Daboll. He has instilled a confidence in the Giants that has not been seen since the Tom Coughlin days.

Though Minnesota was favored by 2.5 points and at home, it seemed the Giants were the consensus pick, among experts. The game was back and forth, neither team having a lead of more than 10 at any point.

Saquon Barkley scored 2 rushing touchdowns, the last one giving the Giants a 31-24 lead. The Giants stopped the Vikings and got the ball back. They started driving down the field and winding the clock down.

With 3 minutes left, the Giants faced 3rd and 15 and a chance to ice the game with the Vikings having no timeouts left. Jones threw a pass to Darius Slayton with room to run, and the Giants’ biggest problem then reared its ugly head: dropped passes.

Slayton dropped the ball, stopping the clock and forcing the Giants to punt the ball back to Minnesota with a chance to tie or win. The Vikings got to midfield when they were faced with 4th and 8. Needing this down to keep their season alive, quarterback Kirk Cousins threw a shallow pass to tight end T.J. Hockenson who was tackled short of the line to gain.

The weight came off Slayton’s shoulders and the Giants were on to Philadelphia.

It will be no easy task taking on the Eagles for a third time. In the regular season, the Giants lost twice, a 48-22 drubbing, and then a 22-16 loss in the last game of the season when the Giants did not play many regular starters.

The pass game is going to be the biggest containment question mark. Not many teams have been able to stop it this season. Get the ball back to the offense in manageable situations, though, and the Giants have a chance.

On top of Jones’ continued success, the Giants will need a big-time game out of Saquon Barkley. Both last week and in his only meeting against the Eagles, Barkley only carried the ball twice. The fifth-year running back averaged 18 carries a game and ran for a career high 1,312 yards.

Especially against a formidable Eagle pass rush that racked up 70 sacks this season, the Giants will need to protect Jones well and try to soften the defense with the run. Jones is more than capable of running as well, carrying 17 times for a team-high 78 yards in the win over the Vikings.

Jones has thoroughly impressed, and Saturday will only be another opportunity to further the story. One thing is for certain already, though: with his contract expiring, Danny will be collecting more than dimes this offseason.