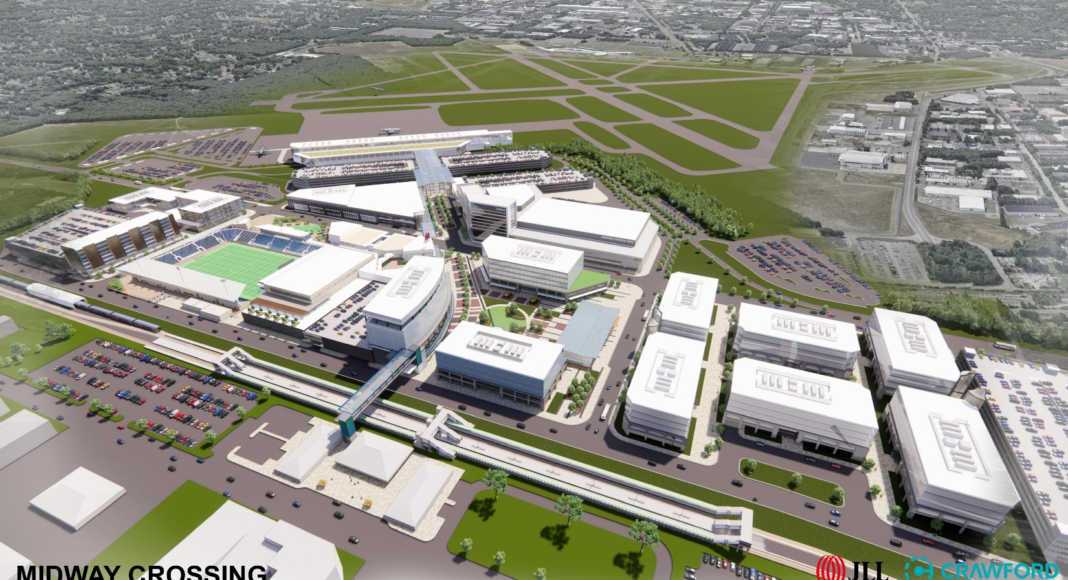 After a long-fought process of community input and developer concessions, the Midway Crossing project has finally left the realm of imagination and entered reality.

On Wednesday, September 7, the Suffolk County Legislature approved resolutions 1617 and 1618, which authorize a term sheet to be used in the negotiation process and create a local development corporation in charge of overseeing the combined efforts of the Islip Town and Suffolk County in their cooperation with the project’s Chicago-based developer JLL.

To recap the last week’s developments, at a special session of the Suffolk County Legislature’s Economic Development Committee on September 2, Cameron Engineering, the project’s lead engineering firm, stated JLL’s willingness to withdraw support for the sports and entertainment venue. Accordingly, language referring to that section of the proposed project was removed from the approved legislation, advancing the project to Wednesday’s meeting.

The news was stated in a mid-sentence about-face by John Cameron of Cameron Engineering, who communicated that “JLL is willing to withdraw the sports and entertainment to allow the legislature to move forward with a positive vote.”

At that September 2 meeting, many union leaders representing thousands of organized laborers spoke in favor of the entire project, including the sports arena and convention center.

Previously, during a regularly scheduled of the Economic Development Committee on August 30, local chambers of commerce members and other community leaders spoke with skepticism about the project’s size and scope.

Many questioned the demand for the additional commercial space, the sports and entertainment venue, as well as other project components. Likewise, others before the legislature have made mention of how Smithtown’s downtown has never recovered from the construction of the Smith Haven Mall. The chambers were fearful of how they would compete with a commercial mecca within such a short distance to the historic downtowns of Holbrook, Ronkonkoma, and Bohemia.

Upon news of the change away from a sports and entertainment venue, Islip Town Supervisor Angie Carpenter said: “We’re pleased to see that this transformative project has been moved forward by the legislature. This is only the beginning part of the process. The details of this development are still in their infancy. The one constant here, is that we are very supportive of bringing high-paying, sustainable jobs to our Town, while increasing our tax base.”

At the September 7 meeting, the project’s lead Engineer, Cameron, boasted of the “letters of support to JLL” in favor of the project. These include letters from representatives of the Suffolk County Supervisors Association, Catholic Health Services of Long Island, Northwell Health, the New York Institute of Technology, the Long Island Association, the Hauppauge Industrial Association, the Building & Construction Trades Council of Nassau & Suffolk County, and the Long Island Federation of Labor, among others.

A longtime skeptic of the project, Legislator Anthony Piccirillo (R-Holbrook), said, “And there have been some characterizations that if you oppose any part of this project, that you are against union labor. And that couldn’t be further from the truth…” in an impassioned speech before delivering a ‘no’ vote.

He also added his fears regarding home values and quality of life issues in the area while noting that the legislators representing the area of the project were not given deference in the decision-making process.

Four of the 18 legislators voted no or abstained from the project, representing both sides of the aisle.

“This is the first step of many in the process,” said Legislator Kevin McCaffrey (R-Lindenhurst), Presiding Officer of the Suffolk County Legislature, as he attempted to assuage the concerns of his colleagues regarding the project.

McCaffrey stood behind the project as a way to generate thousands of union labor jobs and thousands of jobs once it is complete.

There are still many hurdles the project has to face, including numerous environmental reviews with more opportunities for community input likely to come.