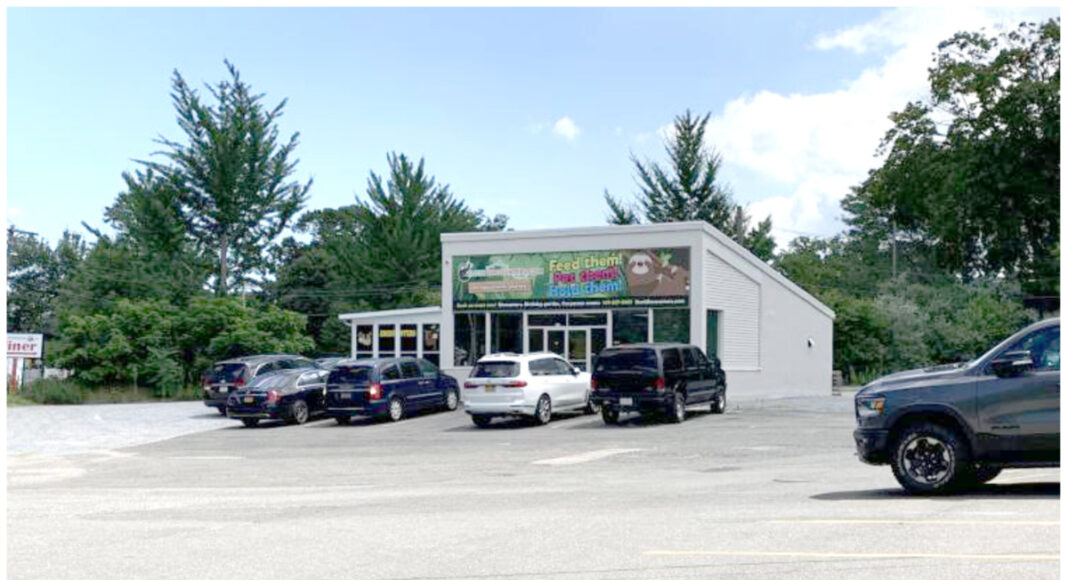 Still zoned to accommodate a Chemex Pool & Supplies store, per a spokesperson of the Town of Islip, Sloth Encounter, located at 551 Veterans Memorial Highway, is currently operating a petting zoo featuring – you guessed it – sloths.

As early as April 30, according to Facebook posts, Sloth Encounter has been operating this sloth petting zoo adjacent to a popular Carvel. And, for as long as they have been operating, they have done so without proper permission from the town, seemingly in violation of Islip town code, which states “No person shall keep, harbor or possess a wild animal…” with few exceptions.

The proprietor of the location, an East Rockaway native named Larry Wallach, isn’t new to claims of maleficence against animals or shy in his defense. Animal rights activists have been following his business ventures across several state lines, with allegations mounting with every new business launched.

However, Wallach fervently denies all these claims. As he escorted a reporter of The Messenger through the facility, he mostly attributes these attacks against him to organizations like PETA while rhetorically asking, “Ask how they keep their animals,” in a jab alluding to popular complaints against the animal rights group’s shelters throughout the country.

One such claim against him he specially mentioned was a February 2017 instance when the Nassau County Society for the Prevention of Cruelty to Animals confiscated a wallaby from Wallach after it was discovered without food or water in the garage of Wallach’s former home on Seawane Road. Wallach said, as he did to the Long Island Herald in 2021, that the incident was the result of a near-death coma in which care for the animals by him was not possible.

On the tour of the facility, an Exhibitors License from the USDA and a Petting Zoo license from the Suffolk County Health Department – the latter obtained after the establishment’s opening – hung on the wall. When asked about the missing Islip permit, Wallach said he retained a local attorney, John Zollo, to get the proper permitting. The permitting situation outlined is consistent with that reported by Newsday.

In a slew of nearly three dozen United States Department of Agriculture (USDA) reports obtained by The Messenger, Wallachran operations have over two dozen infractions of various severity, with a brief suspension of his USDA license in 2013. John DiLeonardo, President of the advocacy group Humane Long Island, described these Infractions as “not typical” with a higher than typical rate of inspections. Wallach refutes this characterization of the infractions.

Adding to the confusion around its permit-less opening is that the venue briefly started as an establishment called ‘Pet Drug Store,’ before its transformation into a petting zoo sponsored by ‘PetDrugStore.com,’ before its currently unaffiliated status – meaning more actors could be involved in the business than suspected, according to DiLeonardo, who described the maneuver as “a bait and switch.”

Now, testimony obtained by DiLeonardo from Denise Flores, who claims to be a former Wallach employee from an establishment in the vicinity of the Ohio Midway Mall, outlines her experience with Wallach and Sam Mazzola, Wallach’s business partner at the time.

“…at that time, I caught Larry Wallach drugging the babies (tiger cubs), I caught him red-handed, he told me it was none of my business,” reads a portion of Flores’ statement.

“I have no clue whatever happened to those cats,” it reads. She further warns people about patronizing and doing business with Wallach.

Wallach utterly denied knowing Flores and rejected any claims levied against him by her, stating that he only handles his cats.

A town of Islip Fire Marshal completed an inspection of the property on July 25 and issued the tenant a Notice of Violation with four violations. They are for: a change of use without a permit; lack of fire extinguishers; lack of carbon monoxide detection, and to correct noted electrical hazards. The re-inspection date is set for August 29. Per The Messenger’s tour, a fire extinguisher could be seen.

As reiterated by a spokesperson for the town, “Section 12-23a restricts the possession and sale of wild animals. The Fire Marshal went back to the facility Monday, August 1 and attempted to issue a violation to the tenant for the 12-23a Code section. The tenant was not there, and the facility was not open. A copy of the new violation was left on the door, and a copy will be sent via certified mail.”

The only lawful purposes pursuant to town code are for a zoological park, a laboratory, a carnival, circus, or outdoor show for which a special permit from the Islip Town Board has been obtained, or an educational or scientific institution chartered or licensed by the State of New York. So, the likelihood would appear slim that Sloth Encounter will successfully appeal the violation and successfully obtain a permit to continue operations within the town limits.

The town code further goes on to require that all animals subject to it, such as sloths, “shall be kept in protective devices which are adequate to prevent such animals from escaping or from injuring the public.” The code may bode problematic, as the business model utilized is one where patrons can pet, hold, and feed the animals in a free-form environment– from which there is at least one allegation of injury.

The law is quite relaxed in New York compared to peer states on owning sloths. The ownership of sloths is legal, and only town laws, such as those in Islip or animal abuse laws, would prevent such an establishment.

In the meantime, the venue attracts many customers from neighboring townships such as Smithtown and Brookhaven.

Previous article
Breaking Bond: She’s a Swamper, Not a Long Islander
Next article
‘National Night Out’ in Smithtown