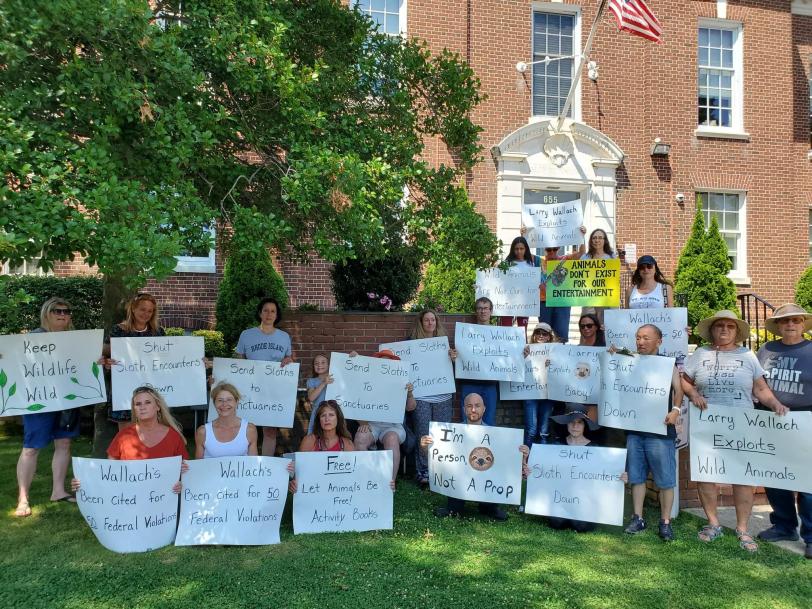 The establishment, operated by Larry Wallach, charges $50 an hour to pet, feed, and handle one of its four sloths.

“My business is to educate the public on wildlife. If you go to any other sloth encounter it’s nowhere near this,” Wallach said, as reported by CBS News. “Humidity, state-of-the-art heaters, enclosures. They have tons of room.”

Wallach has further told media outlets about the cleanliness and safety of his establishment.

However, as clean, or safe as the sloths may or may not be is irrelevant to the question of use, although a member of The Messenger did examine the sloth enclosure – albeit not with the eyes of a zoologist.

“If you decide to change the use to something dramatically different than what was there, you have to apply for a change-of-use permit,” said Islip Town Supervisor Angie Carpenter. “At this moment, they are operating illegally.”

Wallach, who simultaneously had all his permits and was in the process of obtaining one from the Town, has until the end of the month to come into compliance with Town code – a code which bars the possession of “wild animals.” However, given his Exhibitor’s License from the USDA and a Petting Zoo License from the Suffolk County Department of Health (both displayed for public viewing), other locales in the region might be able to accommodate his business.

In the interim, this ‘Sloth Encounters’ is riding a surging wave of Sloth popularity emboldened by similar businesses throughout the country.

“Sloth Encounters and its exhibitor Larry Wallach have proven themselves to be a threat not only to animal welfare, but to public safety with two bite reports coming in over the past two weeks,” said DiLeonardo in response to allegations that surfaced on Facebook.

When asked about the first of these accidents, Wallach did not deny it and said first-aid was administered. Further saying there is a “procedure” in place in case something like this happens.

“Humane Long Island believes Wallach’s long history of endangering the public and mistreating animals warrants emergency action and our members to continue to urge the Islip Town Board to shut him down immediately rather than waiting weeks to consider protecting animals and the public,” DiLeonardo said, unsatisfied by the one-month delay.

“The actual trial shouldn’t take more than a day or two at most,” said Rosenthal. Going on further to state he doesn’t believe “there is an issue about the facts” nor “is the trial going to be real interesting.”

However, the fact that the Town is giving Sloth Encounters a month to come into compliance makes an assumption, according to Rosenthal.

“It suggests that in their mind, they see a way to allow this; and I guess that’s what troubles me about this,” Rosenthal stated. “They could have gone to abuse,” a point which Rosenthal believes could have been argued and they “would have been shut down immediately.”

“The Town has been working diligently on this issue since we first learned of the operation,” said Supervisor Angie Carpenter. “Town code does not permit wild animals. Violations were immediately issued and I’ve directed the Town Attorney’s office to take whatever legal steps we’re permitted to see that this inappropriate operation is shut down permanently.”

Those with complaints and questions regarding the facility are advised to reach out to their local elected officials for more information.

Editor’s Note: Supervisor Carpenter was unable to comment immediately prior to the publication of this article in print.